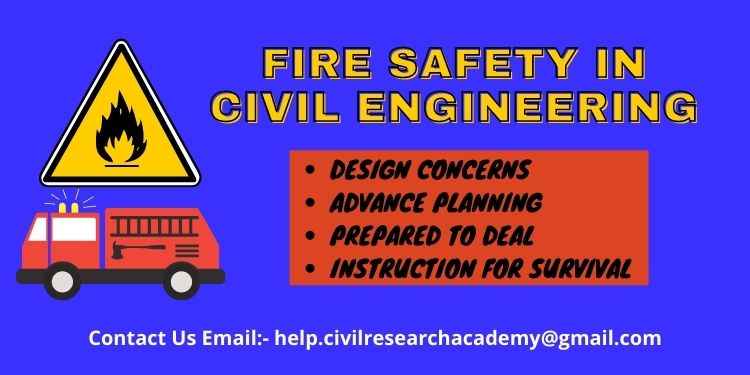 Safety engineering can be defined as the application of scientific and engineering principles to the effects of fire by quantifying the risks and hazards involved and by providing an optimal solution for the application of preventive or protective measures, including loss of life and property damage can be reduced.

The concepts of fire safety engineering can be applied to any situation where the fire is a potential hazard. Although this text primarily deals with building structures, the same principles apply equally to problems involving oil or gas installations or other structures such as highway bridges. Additional hazards from gas and oil installations are primarily due to the more rapid growth of fires and the associated faster rates of temperature rise. This has been identified by considering testing of the material response under heating regimes other than those associated with more traditional cellulosic fires. However, the design methods used are similar to the situation covered by more common cellulose-based fires.

As with any non-building structure, there may be a risk of fire damage, but the fact that this risk is exceptionally low means that such a contingency can ordinarily be overlooked.

Within the discipline of fire safety engineering, there are easily identifiable elements that are related to both life and property safety. These areas are not mutually exclusive because actions that increase life safety can also increase asset protection. The key areas can be specified as follows

This can be done by controlling the flammability of materials within the structure, by the maintenance of the structural fabric and finishes, or by fire safety management in, say, imposing a ban on smoking or naked flames.

Control of means of escape

This can be forced either by the imposition of statutory requirements on the provision of suitable escape facilities or by the education of occupants.

This involves establishing the methods by which a fire can be detected, preferably at the earliest possible stage.

Control of the spread of fire

Here, the concern is the spread of the fire within the building or to nearby properties. This control can be effected either by in-built features (such as compartmentalization) or by control of the distance between buildings or by mechanical means (such as venting, smoke screens or sprinklers).

It covers imposing load-bearing capacity and integrity on the structure in whole or in part during a fire.

Fire safety in tall buildings is critically important. Fire claims a huge loss of life and property in the high-rise building each year.

This article has been produced for people who live in high-rise buildings and tell you what to do if a fire breaks out. Read it carefully and implement the fire prevention techniques.

Outside the high rise buildings, adequate access roads and surrounding areas are designed so that the emergency vehicle can get as near as possible.

Consult your building management and fire department in advance and learn what you are expected to do.

BE PREPARED TO DEAL WITH FIRE AT ALL TIMES

DOES DOESN'T FOR FIRE SAFETY

Does for Fire Safety

Doesn't during a fire

INSTRUCTION FOR SURVIVAL DURING A FIRE