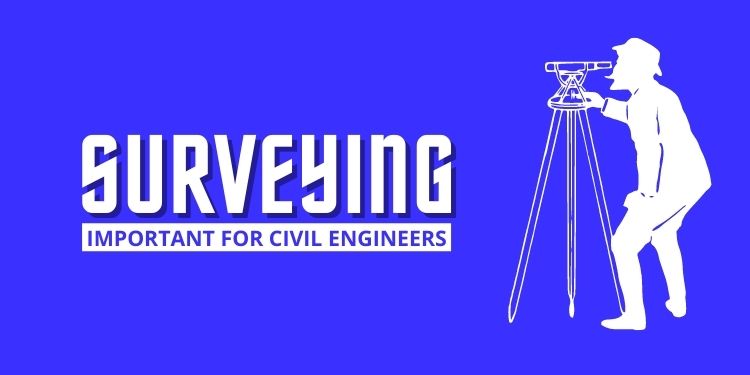 WHAT IS SURVEYING IN CIVIL ENGINEERING?

Surveying may be defined as the method of making measurements of the relative positions of Natural & Man-Made components of the earth's surface and the indication of this information either graphically or numerically. The most typical methods of presentation are by means of a Plan or Map. Both Plans and Maps are pictorial representations of the features on a horizontal plane. The plan is a large scale representation whereas Map is a small scale representation. Height details can be added either as spot heights, which are particular heights of points or as contours that give a less detailed but better visual representation of the area.

Levelling is the art of determining the relative vertical distances of distinct points on the ground of earth. Hence, in levelling the dimensions are taken only in the vertical plane.

AIM OF SURVEYING IN CIVIL ENGINEERING

The purpose of surveying is to frame a map to show the relative functions of the objects on the surface of the earth. The map is drawn to some reasonable scale. It shows the natural characteristics of a country, such as villages, towns, roads, railways, rivers, bridges etc. Maps may also contain details of different engineering works, such as roads, railways, irrigation canals, tunnels, water bodies etc.

Surveying may be used for the following different uses.

1. To prepare a topographical map which shows the hills, villages, towns, valleys, water bodies, forests, gradient of the ground, etc. of a country.

2. To prepare a cadastral map showing the borders of fields, houses and other private or Government properties.

3. To prepare an engineering map which shows the details of engineering functions on the ground such as roads, railways, water reservoirs, irrigation canals, source of water etc.

4. To prepare a military map showing the roadway and railway transportation with distinct parts of a country. Such a map also shows the various strategic points essential for the defence of a country from external and internal threats.

5. To prepare a contour map to determine the storage capacity of a reservoir and to find the best probable route for roads, railways, etc.

6. To prepare a geological map showing areas including underground resources like materials, petroleum, and other resources.

7. To prepare an archaeological map including ancient places which are for tourists and most heritage sites.

Surveying is primarily classified as under:

In geodetic type surveying, the curvature of the earth is taken into study account.  It is spread over a large area surface area. The line joining any two survey points is considered a curved line. The triangle formed by any three points is assumed to be spherical and the angles of the triangle are assumed to be spherical angles in three-dimensional space where the position of a point is defined by three numbers.

Survey classifications are based on the following:

(a) Triangulation surveying, and

3. Based on the objective

4. Based on the nature of the field:

(b) Marine surveying, and

The general principles of surveying are

1. To work from Whole to the Part, and

2. To locate a new station by at least two measurements (Linear and Angular both)  from the fixed reference point.

1. TO WORK FROM WHOLE TO THE PART

According to the first principle,

c. The main survey lines are measured very accurately with a standard chain. After that, the sides of the triangles are measured. The purpose of this procedure of working is to control the accumulation of errors (sum of errors).

d. During this method, if there is an error in the measurement of any side of a triangle, then it will not affect the whole work.

2. TO LOCATE A NEW STATION BY AT LEAST TWO MEASUREMENTS (LINEAR AND ANGULAR BOTH)  FROM THE FIXED REFERENCE POINT.

According to the second principle,

a. The new stations should always be specified by at least two measurements (linear or angular) from fixed reference points.

b. Linear dimensions refer to horizontal distances measured by chains and tape.

c. Angular dimensions refer to the magnetic bearing or horizontal angle taken by an engineering compass or theodolite.